After some brainstorming, we came up with some great ideas. Alexander found a box and created his calendar for Sophia to look like a Christmas gift. Each day she opens a little door he cut from the box.

Sophia used felt and sewed a hanging calendar for Alexander. So far they have opened several pieces of chocolate candy, tiny ornaments for the trees in their rooms, bells, and a coupon from Alexander for a free night of washing dishes. As they got more involved in making their calendars, the ideas for each other became more individual and fun! 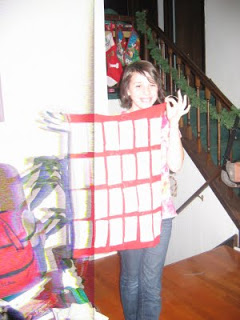 My poor camera is old and tired. I will have to try again on this photo.

Alexander and Sophia have always been very close. They are 25 months apart in age and have just always seemed to like each other. Maybe it is the differences in their personalities, the fact that they are of the opposite sex, that they share so many of the same friends, or that they have just always been compatible. Anyhow, since coming up with the idea of making advent calendars for each other, I have also seen a renewed spark in their sibling relationship. Steve and I have both had to remind them at one in the morning that their laughter is too loud, they come home from walking our dog laughing together, and they just seem to get the other one more than usual. Making the advent calendars and concentrating on one another during this holiday season reminds me of when I was a child with five siblings and my mom came up with the idea of having angels. It was fun to focus on one other person and do nice things for him/her. It gave us a true understanding of what the season was all about. I am happy to see my kids experiencing the same magic of Christmas.