Sunday morning I sat in the kitchen listening to my 12 year old son give his dad a detailed explaination of Call of Duty Four, a video game he played at a friend’s house. In his explaination, he stated reasons the game is good and bad, how he feels the game makes sense and how it doesn’t. They also discussed the pros and cons of the games they played earlier in the day in what they title as “XBOX morning”. Every Sunday morning they wake up early, go for coffee and hot chocolate at Starbucks and then come back to play a few hours of XBOX together. Some Sundays they choose to do something else, but it is still called “XBOX Morning” since that is what they originally set time aside to do each week together.

The debates about technology and children are great. I am recently participating in a book discussion with some other moms on Healthy Children – Healthy Planet. This week’s discussion is on technology.

For my family, technology is seen as a positive and because of that, we are each free to consume as much time with it as we feel it deserves. What is interesting to me, is that although we don’t set limits on how often our children can interact with technology, they seem to have found a good balance. In our house, almost all of our technology is centrally located, which makes it easy for us to sit together and share in technology.

TV
~As a family we watch TV together every Monday night and right before bed every night. On Mondays, we have a few favorite shows we record on DVR, we make a good dinner with dessert, and sit in front of the TV watching together. All four of us look forward to this night because it isn’t only about watching TV, but about helping each other to get all the supplies to the family room for eating, snuggling up on the couch, and talking and making jokes as we watch the shows together.
~Alexander tends to watch the most TV in our family but he is also the most visual. He watches a mixture of shows from the history channel, to MythBusters, to Family Guy. What’s cool about him watching all these shows, is he more than happily shares what he learned with us. So, even though Sophia and I may not be big TV watchers, we benefit from his TV watching too!

Computer
~I can’t tell you how much I learn from the internet. Each morning I wake up and search for one thing that leads me down numerous other paths of learning. I am never shy to share the wonderful things I have learned with my family members. This often creates interesting conversations. (I admit to being the one who spends the most time on the computer in our family.)
~Sophia has wrote and published a book sitting at the computer. She loves to go online and read stories by kids her age. This would be difficult to do without the internet.
~Sophia and Alexander both enjoy playing games online. Here they can meet with their homeschooling friends or meet new friends online. Do I need to teach them to be cautious online? Sure. That is why I stay involved in what they are doing, so we can talk as things happen, not after an awful event has occured.
~We use webcam to talk with friends that have moved away or family. It is wonderful to be able to see their faces as you talk.

Video Games
~Alexander and Sophia both own Nintendo DS’s. With this handheld game they can play with up to six other friends if they are within 30 feet of each other or they can play WI-FI capable games with friends while they are each sitting in their own home.
~Alexander loves games with a story line. We have slowly moved up the ranks from E rated to T rated to finally some M rated games. I say slowly because that is what worked for Alexander, Steve and me. Along the way, we have had great discussions about what happens at friend’s homes may not be what we do at our home, the content of video games, etc. We view new video games together after we have researched them online together. I think the biggest thing with video games is staying involved and knowing what is going on.
~XBOX. Alexander saved all four hundred dollars needed for the system by saving his weekly “payday” money of $5 a week, dog sitting and doing mother’s helper jobs. Many days he will contact his best friend and they will talk on the phone as they play XBOX or a computer game ROBLOX. It is really fun to listen to their conversations since the phone is on speaker.
~Wii. Alexander also saved and purchased this system himself. Although he enjoys Wii, he didn’t feel it offered enough games with story lines and was bored with it quickly. However, as a family and with friends, we enjoy bowling and playing other games together.

Music
~Steve uses the computer to download music, view other musicians playing, and make connections to other players.
~All of Steve’s equipment for playing guitar is run by electronics as well as the software he runs to record his music. 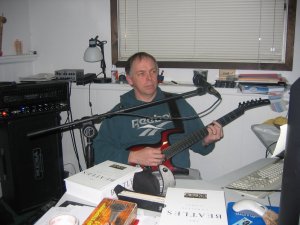 Although many articles on technology claim it robs children of their imagination, family time, etc, I have not found that to be true. All four of us are always learning, always creating and always sharing it with each other. Plus, each and every day I see the creativity my children express in interests they have other than technology: woodworking, carving, crotcheting, nature, reading, board games, Lego’s, helping mom and dad,and much, much more.

Do I feel there is some bad in technology? You bet. I believe that anything that is out of balance will create problems in your life. However, for my family, the benefits of technology as an expressive outlet outweigh the shortcomings. I believe by using technology in our home, we are not only preparing our children for the future but enjoying what it has to offer right now.