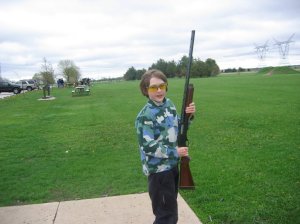 Alexander, aka Zandy or Zandyman, turned 12 in May. One evening Sophia, Alexander and I were discussing an article in Mothering magazine about “Red Parties” which are a celebration of a girl starting her menstrual cycle. We liked the idea of celebrating this wonderful occassion but felt that when the time comes, we would prefer it to be more intimate, such as Sophia and I going out to eat as two women that have accomplished something great in life. Alexander thought this was a great idea too but was curious about how boys celebrated their entry into manhood. As unschoolers, we tend to follow what feels right for us. So, we started brainstorming. What would Alexander like to do? When would he do it? He knew for sure he wanted to do something alone with dad and we left it up to Alexander to know when he felt he was ready for this type of celebration.
Steve and Alexander both enjoy the mechanics of how a gun works and have talked about trying out skeet shooting. So, the morning after Alexander turned 12, they went skeet shooting. This was Alexander’s first time of shooting a gun. They had so much fun. It was definitely a male bonding event for both Steve and Alexander.
It is an amazing thing to watch your son take on the responsibilities of a young man. He now mows our lawn, has a mother’s helper job, is doing some dog sitting, helps around the house with anything and everything I need and he is taller than me. He is definitely a young man that I am proud to have as a son and friend.